Hinting at spring’s distant arrival, daffodils are found lining riverbanks, blanketing hills and dotted throughout gardens across the country. While they may not be a rare sight, they are admired for both their strength in harsh weather and as a bright dash of color against winter’s blue skies.

Known as suisen in Japanese, meaning hermit or wizard by the water, the flower is known for its elegant shape and subtle scent. The botanical name for the Japanese variety is Narcissus Tazetta, and it is believed to have originated in the Mediterranean before being introduced via China in the Muromachi period (1336–1573). As well as being painted and admired in poetry, the bulbs had practical uses throughout the years—namely being used to heal blows and sprains in the Japanese medicinal practice called Kampo.

In many cultures the daffodil is associated with vanity thanks to its connection to Narcissus, who drowned seeking his own reflection in a pool of water. In Japan’s language of flowers, called hanakotoba, however, trumpet daffodils are associated with respect and perseverance while the Tazetta is associated with self-love. The Japanese variety’s pale cream petals and bright yellow cup-shaped corona generally bloom from December to February, with three main growing areas in Hyogo, Chiba and Fukui prefectures. 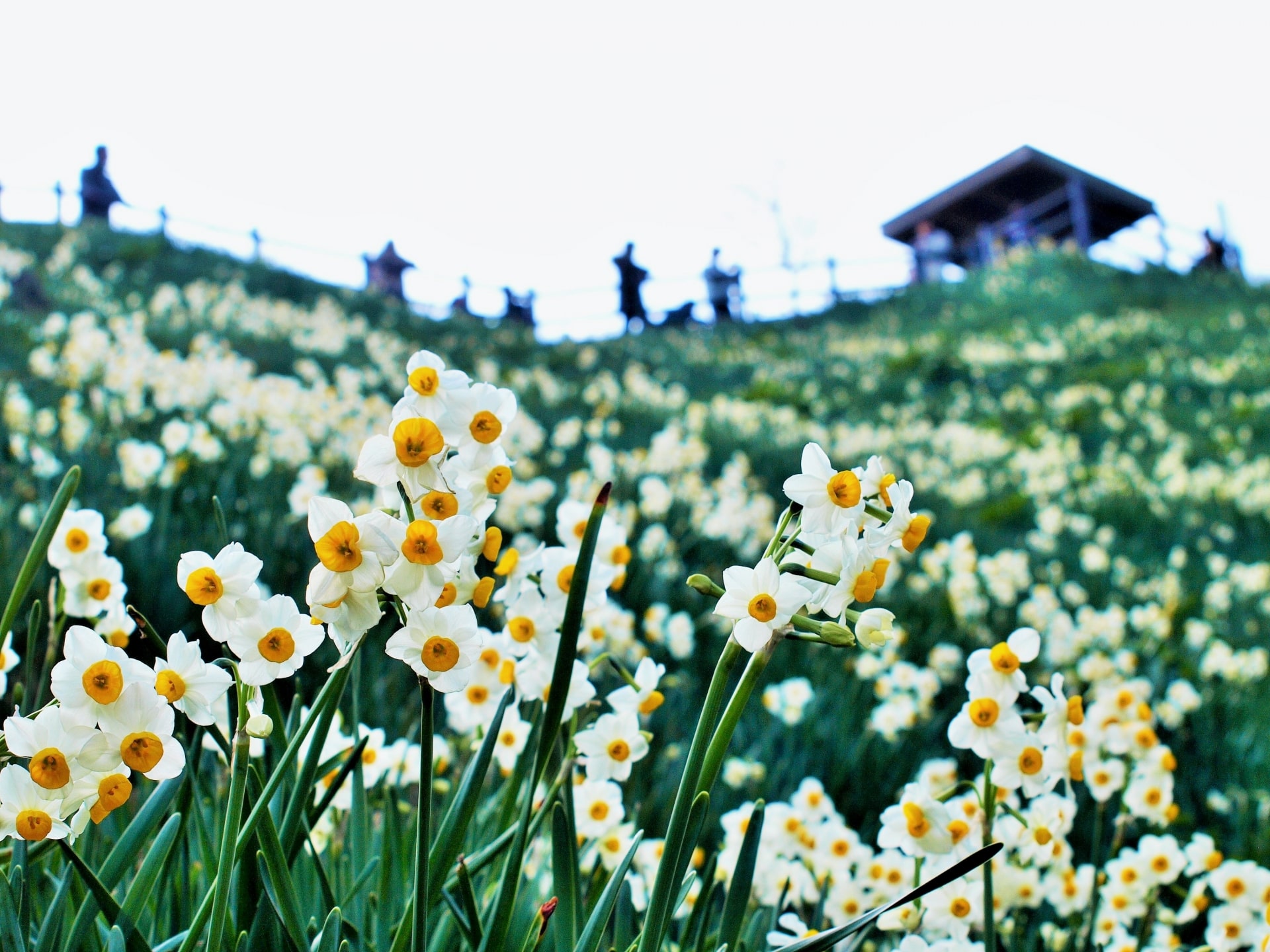 On Awajishima in Hyogo Prefecture, Nada-Kuroiwa Narcissus Field is one of the top three wildflower parks in all of Japan. Visitors can enjoy over five million flowers, with stunning views across sloped hills and out to the sea. The original bulbs were planted by local fishermen nearly 200 years ago and multiplied ever since. Visitors to the island can enjoy red sea bream, Awaji Somen noodle and the Awajishima Burger made with high-quality Awaji Beef after exploring the park’s many trails. The flowers here bloom from late December to the end of February, and making your way along winding paths to the highest ridge is well worth the effort—as much for the floral scent as for the panoramic views.

On Fukui Prefecture’s Echizen Coast, Echizen Cape Daffodil Land is another coastal flower park with impressive views. The park has over 15 million flowers at the height of the season, with walking trails and a scenic restaurant offering a balcony with stunning sea views. As the daffodil is the official flower of Fukui, it is a fantastic place to admire the flowers and even take a souvenir bulb or two home. Nearby, the Tojinbo Cliffs are a popular sightseeing spot while Awara Onsen is the perfect place to warm up after a day of winter walks, followed by a delicious meal of the local speciality of Echizen Crab, or Echizen Oroshi Soba. The daffodils are in bloom from December to January and if you’re lucky enough to visit during mid-January, the local Ebisu Daikoku Tug of War takes place which is a thrilling event with a great festival atmosphere. 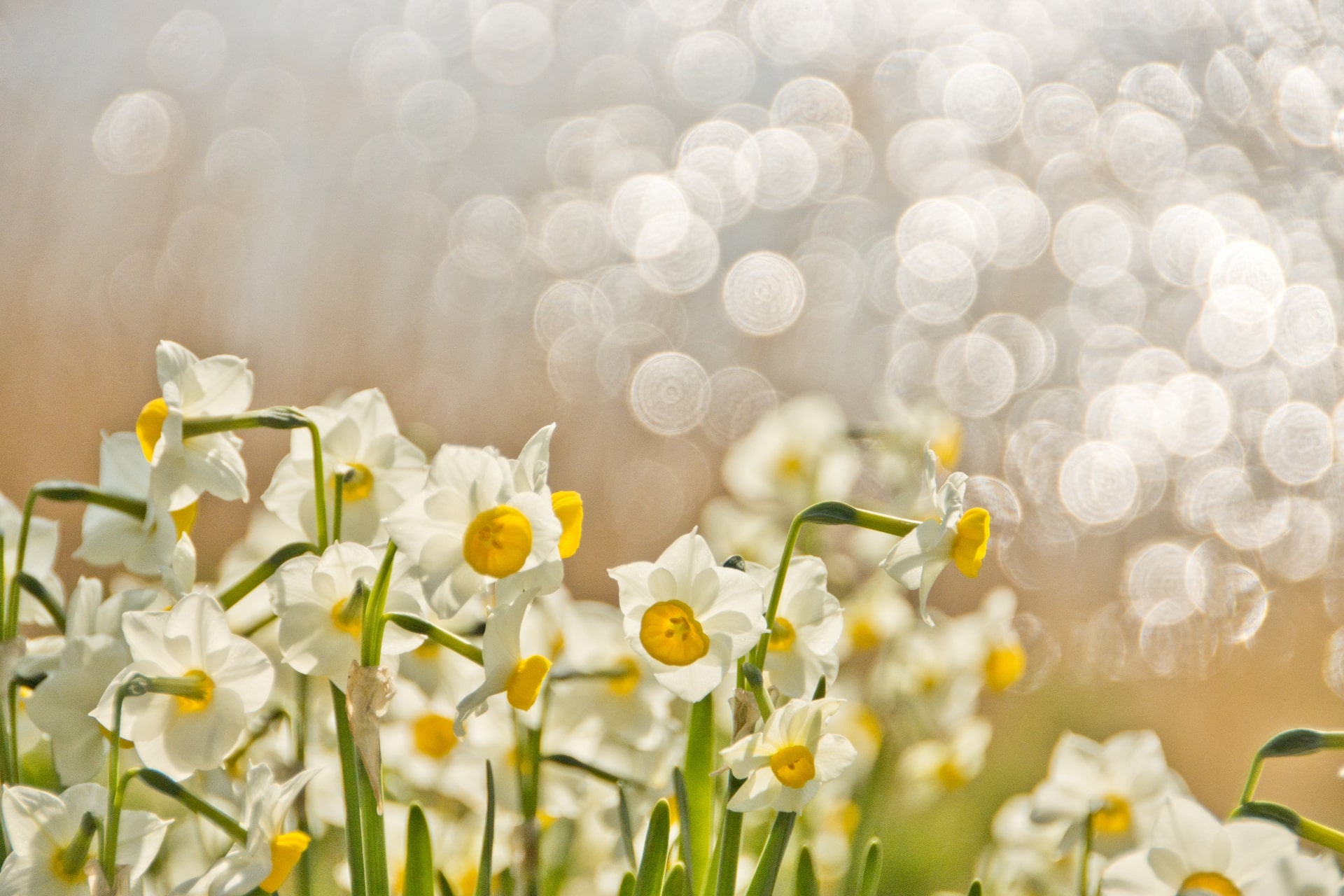 For those closer to Tokyo, Chiba Prefecture’s Kyonan Town is home to a daffodil festival with tens of millions of bulbs to admire. The flowers line the streets and climb the nearby mountain, creating incredible vistas. Daffodil Road is one of the most popular spots, with five million flowers to be enjoyed during the three-kilometer walking trail from Hota Station.

Blooming here for a little longer, visitors can enjoy the flowers from mid-December to early February, with a popular illumination event held at Sakuma Dam Lake Water Park from 5 pm to 8 pm during the annual festival, which runs during flowering season. After working up an appetite, visitors can enjoy a hearty meal at Banya Fisherman’s Restaurant or head to Sweets Kikkado for some local souvenirs.